From 2002, year of its establishment, to 2014, Miviludes has been ignoring the wolves born from openly murderous sects which settled on its territory. They preferred to chase the peaceful bees: spiritual minorities and alternative medicines. Result : a deadly misunderstanding which, unfortunately, keeps going.

Hit hard by attacks since January 2015, France is the European country that deplores the highest number of deaths in terrorist attacks since 2004. And the number of such attacks keeps increasing : Charlie Hebdo, Hypercacher, Paris, Saint -Denis, Saint-Quentin-Falavier, Magnanville, Nice, Saint-Étienne-du-Rouvray and several other attempts fortunately thwarted or aborted... 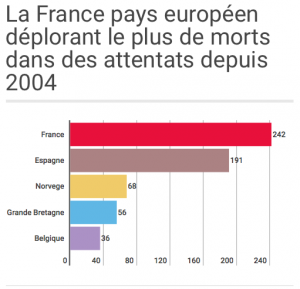 Strangely enough, France is also the country claiming to be the fiercest fighter against “sectarian abuse”. It claims to be “on the forefront” in this area, thanks to the impressive legislative, judicial and law enforcement weaponry it has implemented in recent years : Miviludes (to fight against sectarian abuse), with a President whose salary has been multiplied by two, Caimades (an anti-cult special police), the About-Picard law (a law punishing “sectarian abuse”), anti-cult associations funded by the government (Unadfi, CCMM, Gemppi, etc.), countless warning campaigns, millions of euros spent each year...

The problem - and it is huge - is that it always fought against peaceful individuals and groups while ignoring totally at the same time members of dangerous groups openly claiming their willingness to kill.

The issue of creating tools for prevention and fight against Islamist radicalization was raised extremely late. It started to be considered by Miviludes in 2014 only, although existing since 2002. It is only since that year - more than 30 years after the first warnings of Islamist sectarian abuse ! - that Miviludes has been “working” on “detection and prevention of [Islamist] radical behavior”.

True, this inter-ministerial body has not been helped by the State, all governments [1] have been equally blind and biased. “Since the 80s”, regrets in Le Figaro in May 2015 Jeannette Bougrab, a French scholar who became Master of Requests to the Council of State, “France has been underestimating the rise and radicalization of Islam. The case of the veil in Creil in 1989 was a first warning, unfortunately ignored. The elites have preferred to cover their eyes rather than take the measure of the disastrous consequences of the abandonment of our Republican model. I tried to alert through writings and lectures on the severity of the phenomenon of radicalization of young Muslims, some being recent converts. But one sometimes has the terrible impression that people get used to the violations of the most fundamental rights.”

This total blindness in front of real threats was however coupled with a paranoid psychosis in front of minority spiritual movements (other than the Islamist ones) and alternative medicine, and with their unwavering harassment for twenty years.

In 2005, the Intelligence service (Renseignements Généraux, RG) have alerted on the Islamist threat

A striking example, in February 2005, an article in Le Monde reported the contents of a report on the Salafist movement in France which was presented to Minister of the Interior by the Central Direction of Renseignements Généraux (DCRG) : “The soil is favorable, the plant grows and its roots are not compatible with those of the Republic. (...) [Text] establishes a mapping of its current areas of influence. It also addresses its modes of action in sensitive areas, where it has most of its activists and supporters, more than 5,000 people in total, of which about 500 constitute the core.” According to the RG, Salafists currently control [in 2005] forty places of worship throughout the territory and conduct destabilization attempts in forty others, in order to take power.

“The DCRG study shows that Salafism, a split movement in perpetual evolution, has expanded its influence in recent years in almost all the territory. In 2000, this radical vision of Islam gathered followers in six regions ; today only four are spared (Lower Normandy, Corsica, Limousin, Poitou-Charentes). For the RG police, Salafism is the preferred antechamber of young Islamists who then espouse violent action.”

That same year, following the bomb terrorist attacks in London, France had raised the alert level of its Vigipirate Plan. A dozen small groups of radical Islamists were under very close watch by RG over the territory. They were individuals, nearly 150 in total, with an extremist religious commitment and “tendencies to criminal actions”, in the words of a police official.

Such sectarian abuse, that should theoretically come as emergency cases ahead of their concerns, if one believes the objectives assigned to this body, Miviludes ignored them, even though the dangerousness of these people has been proven and the “sectarian” character of the abuse is obvious. 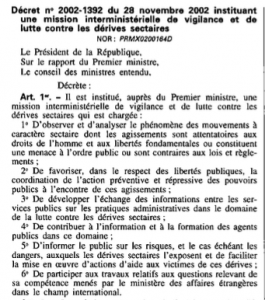 Inside the Journal Officiel 29 november 2002.

No, this very year, they publish a report that does not say a word about the Islamists risks and focuses on an alleged “social evil” : “Listening to the victims and their families, Miviludes now make a disturbing list of damages caused by the influence exercised by persons or organizations behaving as thought masters. Such abuse occurs in all areas of social life, health and care, training and tutoring, sports and cultural activities, esoteric and mystical groups. They note that new bodies appear almost daily, that no point in the territory is spared, that these micro-structures are often much more difficult to identify than large well-known organizations.”

The danger in this area is not apparent, but Miviludes claim to be expert to expose the crooks : “In the register of seduction,” they wrote in their report, “some sectarian organizations advocate, for example, the fight against substance abuse, rejection of violence or the defense of children's rights. Before exercising any criticism against the generosity so displayed, the state will have to provide evidence that this beautiful language is an illusion and conceals a will to proselytize and develop a situation of dependence or undue influence.”

For France, “cults” are a greater threat than Islamists 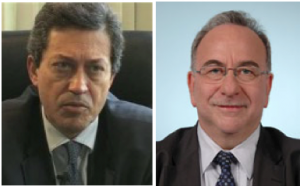 Georges Fenech (left) and Serge Blisko, the former and the new president of Miviludes.

Experiencing enormous difficulties in providing such evidence, Miviludes will, a few years later, imagine another way to convince French citizens that fighting against spiritual minorities and alternative therapies (soft medicine), described as “sectarian abuse” for the cause, is much more important and urgent than working to stop the Jihadi virus.

They will order by themselves an Ipsos poll which culminated in 2010 with results that no journalist, by the way, had the idea to check, despite the fact-checking mode : cults (there was no question about Islamist cults) constitute a “significant” threat to democracy according to 66 % of French people. 42 % of them perceive them as a “threat to their family and friends around.”

Even more extravagant yet, 20 % of respondents knew in their surroundings one or more “victims of sectarian abuse”, i. e. one French out of five ! If that were true, this would be enough to trigger an immediate national mobilization and a massive plan of protection. This has not happened.

In fact, this poll, widely echoed uncritically by the press, is not based on anything objective or factual : it can be analyzed, at most, as the successful result of the anti-cult propaganda by the government.

“Gurus” do not use bombs

The list of groups and individuals unjustly discriminated against by Miviludes is too long to be reported here. Those interested can check their annual reports and thematic documents which are full of accusations without evidence and of false accusations.

Or see here for the specific issue of unconventional medicine.

Targeted groups and individuals, labeled as crooks or “gurus” by Miviludes, have sometimes tried to defend themselves in court. But, also attacked by the media and tried by judges trained in this area by Miviludes and associations like Unadfi, they were unlikely to be heard. As they use no bomb and murdered no one, the modern State Inquisition was able to quietly go against them with the express support of mainstream media and the public, completely manipulated.

The executive power, committed to a wrong conception of “sectarian abuse”, is powerless to understand, even more to reduce, the true threat by real opponents to the Republic, Jihadists who do not bother with the subtleties of “democratic debate”.

“Gurus” do not use bombs. But they are the ones Miviludes are actually hunting down.

> In short, if I had to summarize my feelings, when able to hit without risk peaceful individuals or groups that can hardly defend themselves, the Republic is “on the forefront”. When it comes to fighting against groups and hate speech calling for the destruction of the country, there is a low profile attitude. How many more deaths and injuries will it take before France finally wakes up and changes its attitude ?

[1] There were a few exceptions, but, as often, they have not been heard. Thus, MP Benoît Hamon regretted that on such a serious matter as the burqa in the Republic, we do not speak of the movements that inspire this kind of radical religious militancy “including Salafist movements” (Le Figaro, January 24, 2010). He added that “if the government wants to go to the end, he should inscribe Salafists in the register of sects and cults.” But we would have risked angering the “good” Muslims and exceeding the limits of a constitutional State. Yet in 1995, MPs did not hesitate to infringe on the constitutional State by publishing without investigation nor debate, a list of 175 alleged sectarian movements. Neither the Order of the Solar Temple nor Islamist groups were on this list. Similarly, Miviludes was not embarassed to establish - without scientific or contradictory proceedings, flouting without fear of being reprimanded the presumption of innocence of involved practitioners – lists of alternative medicine presented as “sectarian risks” (see below).

- Attacks, New Age.- Fight against all "sects" : the reasons for a failure, by Débredinoire.

- "Analysis : Jihadism and "sectarian abuses" by Jean-François Mayer, a historian, founder of Religioscope.

One thought on “Blinded by his anti-sectarian obsession, Miviludes has left a free field to Islamist terrorism” 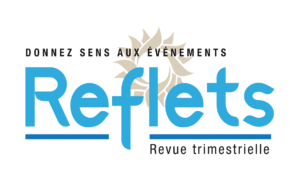